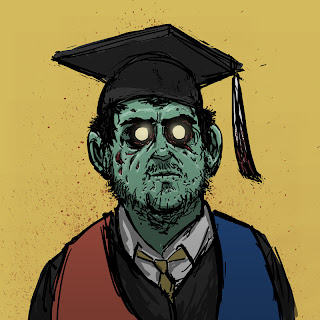 Congratulations Robert Bryce Buckley Jaws Gallagher to the Third Marlor!  You are now Graduated... from LIFE!  With this defining moment in this young man's life, we at the ZOA decided to try yet another experiment.  We wanted to know where true allegiance lie, and we thought Buck made a perfect candidate.  We wanted to know which instincts would kick in, once zombified.  Buck is a die-hard (to say the least) BYU Cougar fan.  Yet, today marks his graduation from the University of Utah.  A life-long dedication to an establishment and its sporting clubs delves deep into the human psyche, and is difficult to penetrate, even by a College Degree from another institution.  So, the debate ensues: heart vs. mind.  His heart lies in BYU, but his mind was educated at the U of U.  The heart wants what it wants (irrationally), but the mind looks at the world objectively (rationally).  The sensation of a BYU win, or the security and feeling of accomplishment of a U of U Grad.  Which of these two will win, when Buck becomes undead?  Which instinct drives the Zombie Psyche?  Well, the results were, rather predictable actually.  He did not choose Blue for BYU, or Red for the U of U... He chose Grey, as in Matter... Although choosing Brains would lead one to conclude that he chose with his mind, he actually was not choosing his brain, but rather, the brains of others.  We called the experiment a success, for even though the study was not overly helpful, we can now include Buck among the Undead.  Congratulations once again, you Stalwart Beast of a Man!
Posted by Jeremy Thompson at 6:42 PM 14 comments: 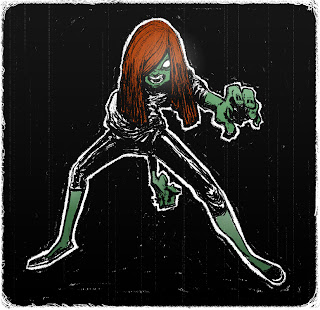 The world demanded it, and we delivered: A Ginger Zombie.  For the first time, a Red-Headed Wonder has joined our cause.  We don't know if this will spark an international frenzy or not, but frankly, we don't care.  We acknowledge there are differences of opinions when it comes to the ginger folk, but we at the ZOA don't see in Black and White... and Red.  We see in Green... and Food.  And this particular new Greenie is my own flesh and blood... and guts: Cousin Linsey.  Unfortunately, during the "change," her back took a turn for the worse.  Luckily, our kind don't so much feel pain.  Our quest to acquire the minds of others supersedes that of mere mortal pain, so I'm sure she won't mind too much.
Posted by Jeremy Thompson at 12:36 PM 9 comments: 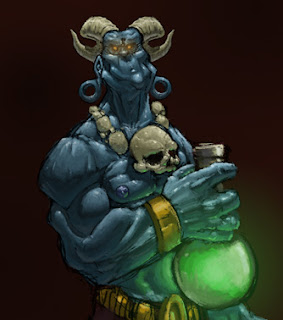 Seems like our team of super-fancy technicians are at work "enhancing" this image.  Maybe one of these days we'll actually get to see what Crazy Dave is actually doing...
Posted by Jeremy Thompson at 6:16 PM No comments: 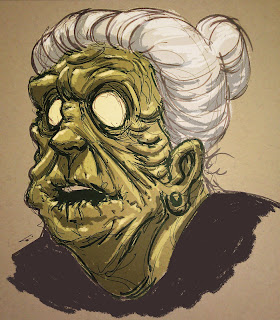 Have you ever been sitting around with a group of friends, reminiscing about the days when you were a kid...?  You had so much fun, no worries... You were alive, for one thing... Well, we had such a moment the other day, and one thing we missed was grandma's cooking.  So, we went down to the local retirement home (yes, again... they're just so slow... they make us look like Usain Bolt) and tried to coerce this elderly woman into making us some good, old-fashioned home-baked bread.  Well, she had a panic attack, tried to run, stumbled over her walker... it wasn't pretty, and we felt bad for her... but we were hungry... So, When in Rome...  Long story, short, she is now with us, and is still one fine baker.  Except now she specializes in making fresh-made, old-fashioned loaves of head.  Fantastic!
Posted by Jeremy Thompson at 8:34 PM 4 comments: 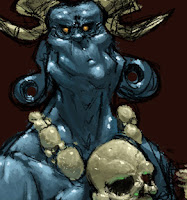 This is our glorious necromancer, Dave.  He has been a great help over these past few weeks as our grass-roots operation gets off comes up through the ground.  Dave is a fairly likable fellow, the only problem is he doesn't stick around in one place for too long, so it's extremely difficult to get a good image of him.  Plus, he thinks that photos steal your soul... I guess he would know a thing or two about that, so who am I to argue?  Anyway, we just have to sneak a photo every now and then with our phones while we pretend to text.  We're trying to piece together what we can from all of our phones, and it is just taking some time.  Hopefully we'll have this image processed within the next day or two.
Posted by Jeremy Thompson at 6:18 PM No comments: 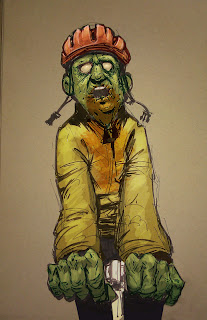 We at the ZOA felt it was time to protect what we love most: brains.  This new Zombie Helmet protects our only weakness.  It felt natural to try and create a means by which we can protect our supporters.  Right now, we encourage those without helmets to seek out those with helmets, and treat the helmet like a Happy Meal toy.
Posted by Jeremy Thompson at 6:16 PM No comments: 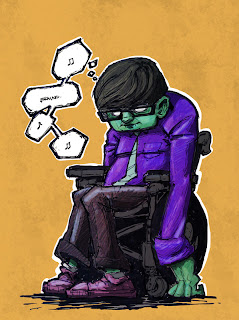 What started out as joke, turned into something even better: science.  How is that better?  Let me tell you.  A group of us zombies were sitting around, digesting yet another fantastic meal and watching the latest episode of "Glee," when Zombraham asked Zombama if a person in a wheel chair were to be zombified, would they regain use of their legs.  I then made a clever comment about a drumstick and a gut slushee, and suddenly everyone was hungry again.  But the thought still remained: would a person in a wheelchair be able to walk...?  Well, we decided to find out.  We sought out Artie Abrams and had a glorious dessert, and we waited for our question to be answered.  He finally awoke, and to our surprise, he did not regain control of his legs... and even more disturbing, he lost control of one of his arms...  Now, he just spins in circles, trying to sing.  We do apologize to all of you "Glee" fans, but the way this season is going, we may have done you a favor...
Posted by Jeremy Thompson at 6:00 AM 3 comments: 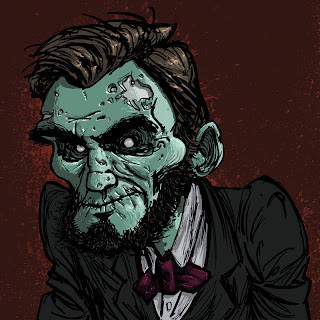 Ladies and Gentlemen, do we have some exciting news on the Zombie Frontlines... Abraham Lincoln has joined our cause!  It's funny what enough money and a little necromancy can do!  Yes, after 150 years, Mr. Lincoln is once again ready to be among the living.  Unfortunately, the process wasn't completely smooth.  Imagine, after all this time, being the only person who didn't know who killed Abraham Lincoln.  He was upset to say the least, and has an understandable beef with actors now.  He said vengeance would be his, and I who am I to get in his way?  In fact, that's the kind of sentiment we love here at ZOA.  And we're hoping he can continue this enthusiasm into next year... We were going to wait and make a special announcement, but I cannot contain my excitement:  Mr. Abraham Lincoln is throwing his proverbial top hat into the presidential race!  Yes, Ladies and Gentlemen, Zombraham Lincoln* is making another bid at the presidency.  We feel he should have the right to finish out his second term, but, to be fair, he will be running again in 2012, under the Green Party (we're changing the meaning of that... And if anyone has a problem with it, well, we have the means of making them truly "green").  THESE are exciting times.  Stay tuned for updates!

*He didn't really like the previous nickname of "Slaybraham." He felt it was dishonest...  He doesn't "slay."  And we know, can't have a "Dishonest Abe." We're not here to rewrite history, we're here to eat it.
Posted by Jeremy Thompson at 6:00 AM No comments: 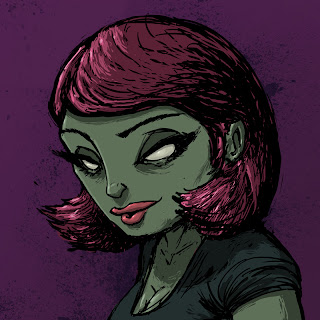 What's the first thing you notice about this Zombie movement?  That's right, the lack of steaming hot zombie women folk.  That is, until now.  Let me introduce the first woman of the ZOA.  Some might say, "How could you do that to your own wife?"  I say, "How could I not?!"  Yes, Ladies and Gentlemen, Corie has joined the ranks of the ZOA, and watch out, because her work is not done!  She has already gotten off to a screaming start!  In fact, I can still hear those screams!  And, subsequently, those screams turning into glorious, monotonous zombie groans!  She may look sweet and innocent, but she has a vicious bite! You think she colors her lips with Maybelinne, but I think it May-be-a-spleen!
Posted by Jeremy Thompson at 6:00 AM 2 comments: 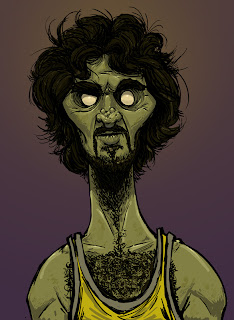 We at the Zombification of America would like to welcome our newest Zomrade: Pau Gasol of the LA Lakers!  Now, I know some of you are thinking, "Wait a minute!  He's a Spaniard!"  Well, sometimes, we at ZOA take a more stealthy approach.  We figure that our Zomrades will make a NEW America, with a literal melting pot of citizens.  We figure that "Zodar" (zombie radar) can be compared to "Gaydar."  Europeans always throw us off!  And if the public can easily accept that a 7-foot Spaniard has been a Zombie from the beginning, it will make our goal at ZOA that much more attainable.  We realize that, at first, zombies can indeed be frightening, so we are taking extreme measures to ensure the transition is as quiet as a zombie's first groan.
Posted by Jeremy Thompson at 9:00 AM No comments:

Non-Art Blogs, which are Humorous

You Are Here: X